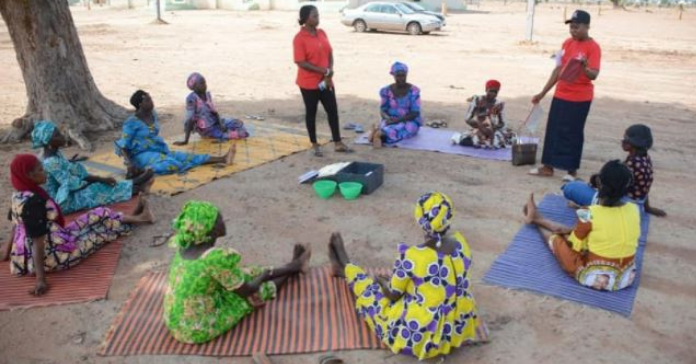 
In 2019, the conflict in northeastern Nigeria entered its eleventh year. Since 2009, the Boko Haram insurgency and the government’s military response have killed tens of thousands of civilians and displaced millions across the Lake Chad region, which straddles Cameroon, Chad, Niger, and Nigeria.

The displacement of persons in towns, villages, and among families have ushered in the intervention of international and local organizations to form camps for internally displaced people (IDPs) around the fringes of affected places.

Christian women IDPs are particularly vulnerable to exploitation and violence.

In our meetings and community assessments with our local partners in Nigeria, we identified five primary drivers of gender-based violence.

Embedded in Nigerian culture are some harmful teachings including the following:

A lot of women who were captured by Boko Haram were forced to marry their abductors, and many gave birth in captivity. Upon reuniting with their families, these women have been met with scorn. Some believe the women married their abductors willingly. Others are afraid these women will spread disease in the community. As a result, families and communities are ostracizing them. Women are contemplating returning to their abductors rather than face further rejection from their families. Some have lost hope altogether.

Married women suffer as a result of total dependency on their husbands. About 50-55% of women totally depend on men, due to women being denied access to education.


With these five primary drivers of gender-based violence in mind, we have been working with our incredible local partners to build a self-sustainable development model.

We Spiritually Encourage
Take Heart staff meet regularly with people in the IDP camps to remind them of their inestimable worth in Jesus and to encourage them to continue to fight the good fight of faith.

We Technically Equip
We are equipping local leaders with Take Heart’s development model. Take Heart is working hard with local partners to tackle the gender-based violence crisis head-on. To combat harmful cultural practices we are spreading awareness through workshops and discussions about domestic violence, human trafficking, discrimination, and more.

We are providing women with free self-defense classes to help them stay safe, especially at night when they are most vulnerable to victimization.

We Financially Support
We are providing women with alternative and dignifying sources of income to help them escape abuse. Take Heart provides women interest-free loans for small business start-ups.

With the help of prayer partners and financial supporters like you, we are building resilience and establishing a brighter future for women in Nigeria. If you’d like to increase your monthly support or start donating for the first time, give today at takeheartcanada.com/give . Your gift of $25 or $50 per month will go a long way towards overcoming gender-based violence in Nigeria.

You have Successfully Subscribed!